Behind the Image: Sanderlings

Apologies for the time that has elapsed since my inaugural BTI image; I had intended to do one each week, but have realised that with the amount I have on, that is unlikely to occur! Therefore, I'll just try and do them when I can, making every effort to keep them regular.

The image that is the focus of the second BTI is of some Sanderlings, taken on South Shields beach in Durham. Now that I have a car up with me for my last year of uni at Durham, I've been trying to photograph things I wouldn't get the chance to back at home, and one very obvious group of subjects were coastal birds! Living in London means I rarely get out to the coasts, so I was keen to make the most of living relatively near the wonderful northeast coastline.

Sanderlings can be found on most beaches along the coast up here, but photography is better in some places than others. At South Shields, there is usually a fairly healthy group of the birds feeding along the shore, and due to the constant presence of people on the beach, they are often very confiding.

Before the day on which this image was taken, I had photographed them a couple of times before, but had left with fairly bog-standard images of birds on the sand from a low angle. Although aesthetic, they were nothing different, and in no way stood out from anything done before.

The day this was taken the sun kept going in and out of the clouds. While the sun was out I was trying to photograph the birds with fast shutter speeds as they zipped along the beach. When the sun went in, however, the flatness of the light lent itself to using much slower shutter speeds and trying to blur the movement, while keeping the head sharp. Unfortunately this is easier said than done! Although the majority of the birds' movement is to the side, the head also moves up and down slightly as the run, making it extremely difficult, if not impossible, to get images with blurred legs and background and a pin sharp head.

As well as motion blur images of them running, I also tried it on flying birds. Although the birds were tolerant of people, the presence of dogs would flush them, so I regularly had the change to photograph tightly-knit flocks hurtling past me low over the waves. At the end of the day it was one of those images that was my favourite, taken at 1/15s. 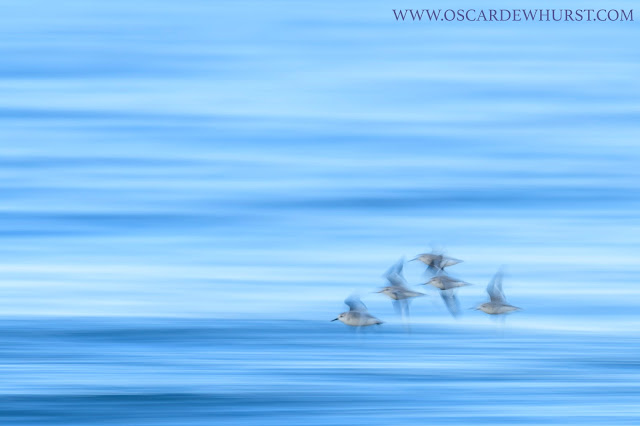 Thanks for reading, and I'll be back in a few days with the next instalment!